We are delighted to offer our international customers the opportunity to share the INTERMIX experience!

We offer worldwide shipping. Shop our site in your selected currency and you will see your complete order total, including shipping fees, customs tariffs and taxes when you’re in checkout. Once you submit your order, the total is guaranteed at the exchange rate indexed when you placed your order. You will not be charged any additional fees at delivery.

If your country is not shown below, please let us know that you would like to shop with us and we will give your request top priority.

Step Into the World of Malone Souliers 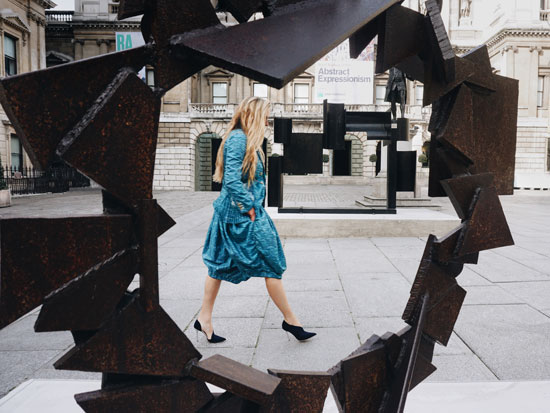 When did you first become interested in art? Was it always part of your life growing up?
"It wasn't so much art in particular as it was the idea of creating and craftsmanship. I always considered myself to be 'a maker.' I tried my hand at welding, furniture making and all sorts before moving on to cordwaining. Shoes, or rather the creation of shoes, from the ground up, always held a fascination for me. I like to understand how something is created and works internally, before its design."

Why did you decide to study fashion? Why in London?
"I originally was a horse rider and was actually selected for the Junior Olympic Equestrian Team at an early age. However, my desire to create grew too loud to ignore and I enrolled in art school in Colorado. Aften engaging in the various processes of furniture design, from welding to carpentry to upholstery, I discovered that my skill was really in my hands—and eye. My own interest in shoe design and craftsmanship led me to honing my craft at Cordwainers at the London College of Fashion. I then continued to develop and grow my skills at a number of renowned ateliers, before founding Malone Souliers with Roy Luwolt.
"The main draw for London was the element of traditional craftsmanship. The institutions of Savile Row and Jermyn Street, in particular, the elements of craftsmanship and tailoring that men had long been afforded but women left to endlessly search for is, to this day, very much our driving force."

How has your background in art influenced your designs?
"Art played a huge part in my inspiration for the FW16 collection. I was really inspired by the works of German visual artist Rebecca Horn. Horn's work explores the juxtaposition between sexual availability and intimacy—it is restrained yet intimate and it highlights the tension between tenderness and aggression. Her balanced, conceptual presentations directly influenced my design for the FW16 footwear offering through the addition of knots, ligatures, criss–cross straps, well–formed silhouettes and the clever use of positive and negative space."

What are your current favorite museums and exhibitions? Why?
"Of all the museums to visit in London, the Royal Academy is arguably one of the most important. As cultural institutions in Britain go, its historic dedication to the arts is near unrivalled and still plays a dominant role in the support of emerging artists today.
"One of the current exhibitions at the RA is the Abstract Expressionism. The exhibition explores an unparalleled period in American art and reveals the full breadth of a movement that will forever be associated with the boundless creative energy of 1950s New York. For me this is a current favorite exhibition as it features the powerful collective impact of Pollock, Rothko, Still, de Kooning, Newman, Kline, Smith, Guston and Gorky."

For someone visiting London, what are the museums and exhibitions they shouldn't miss?
"For me the Tate Britain is an absolute must–see. Dedicated to all things British, it charts the course of British art history from 1500 to present day. It displays artists from John Constable to David Hockney to Henry Moore. The collection is incredibly impressive and its setting is just as magnificent. It has an elegance and style which make it uniquely British. It also plays host to the Turner Prize, which is the most famous prize awarded for contemporary art, althought it is a somewhat notorious one."